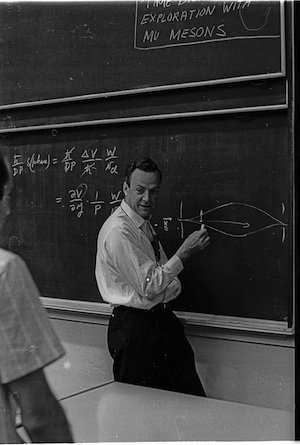 Criteria for the Prize

The Richard P. Feynman Prize in teaching is to be awarded annually to a professor who demonstrates unusual talent, creativity, innovation, and an ability to create an inclusive learning environment in undergraduate and graduate classroom or laboratory teaching.

Origin of the Prize

Established in 1993, the annual prize is made possible by a gift of endowment by Ione and Robert E. Paradise, with additional contributions from an anonymous local couple, in appreciation of Richard Feynman's contributions to excellent teaching.

The prize consists of a cash award of $3,500, matched by an equivalent raise in the annual salary of the awardee.

All tenure-track and tenured professorial faculty of the Institute are eligible.

Nominations for the Prize

Announcements inviting nominations for the prize are made at the beginning of the fall term. Nominations for the 2021-22 Feynman Prize may be made by any member of the Caltech community, including faculty, students, postdoctoral scholars, alumni, and staff. Nomination packages should include a letter of nomination of no more than 750 words with up to five additional letters from students and colleagues of no more than 500 words. Supporting material, such as a curriculum vitae and course syllabus or description, can also be included. Email nomination packages no later than January 10, 2022 to Incomin.1aofq5la4uxgollo@u.box.com.

Renominations should conform to the guidelines for nominations.  Nominees not selected in a given year will be considered part of the nomination pool for each of the following two years.  Consideration of a nominee after three years will require renomination.

Presentation of the Prize

The Feynman Prize will be presented at a regular meeting of the Caltech faculty in the second term. In addition, the awardee will be honored at a small celebratory dinner or other suitable event with a few colleagues and members of the administration, and the donors of the prize.