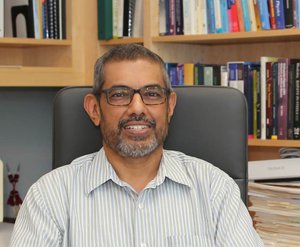 Kaushik Bhattacharya is the Howell N. Tyson, Sr., Professor of Mechanics and Materials Science here at Caltech. His research group studies the mechanical behavior of solids and uses theory to guide the development of new materials.

Professor Bhattacharya received his B. Tech degree from the Indian Institute of Technology, Madras, India; his Ph.D. from the University of Minnesota and completed post-doctoral training at the Courant Institute for Mathematical Sciences. He joined Caltech in 1993. Dr. Bhattacharya has held visiting positions at Cornell University, Heriot-Watt University (Scotland), the Max-Planck-Institute (Germany), the University of Cambridge (England) the Indian Institute of Science, and the Jet Propulsion Laboratory. He received the Warner T. Koiter Medal of the American Society of Mechanical Engineering (2015), the Young Investigator Prize from the Society of Engineering Science (2004), the Special Achievements Award in Applied Mechanics from the American Society of Mechanical Engineers (2004), and the National Science Foundation Young Investigator Award (1994). Professor Bhattacharya is a fellow of the Society of Industrial and Applied Mathematics, and received Caltech's Graduate Student Council Teaching and Mentoring Award (2013).  He was the editor of the Journal of Mechanics and Physics of Solids (2005-2015) and served as Executive Officer for Caltech's Mechanical and Civil Engineering department (2007-2015), overseeing the renovation of the Charles C. Gates Jr.-Franklin Thomas Laboratory.

More information on Dr. Bhattacharya may be found on his website.